In 2016 we entered a competition run by the Auckland Maritime Museum as part of their exhibit Ko au te wai, ko te wai ko au - I am the water and the water is me.

We told the story of our learning in 2014 which culminated with a Communication of Learning to the community in the form of a  performance - Roimata Toroa.

We won the competition and our video became part of the display, and we received $500 for the school! Karen from the museum came to present us with a certificate at assembly. 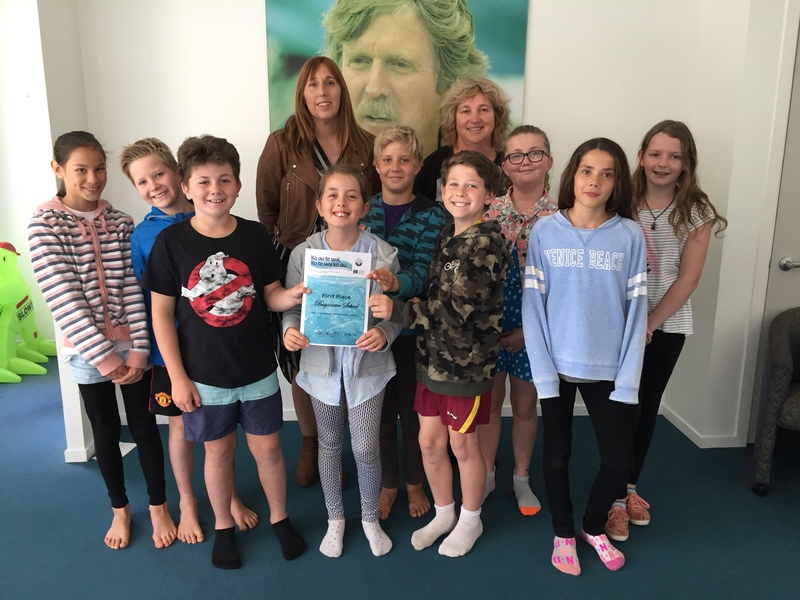 "My name is Toroa Tawhiri-matea. I am a royal albatross. I was born on an island, just off the coast of the mainland. Trees towered above isolated coves. Crystal clear water trickled from streams. I was never in danger and there was always a food supply nearby. We lived in paradise, my beautiful friends and I.”

These are the opening lines of our Communication of Learning which Bayswater School produced in 2014 to send a message to whānau and friends. Roimata Toroa (Tears of the Albatross) told the story of an albatross that found his island home and the surrounding waters were becoming uninhabitable! This is our story…

In term 2 our fertile question was "Waste not, want not?” We discovered what humans had done to our beautiful lands and waterways and then we looked at what we should be doing to change this. We learnt not just about what we can do to clean up but also looked to the future. We learnt about reducing, reusing and recycling and about sustainability. Bayswater School is a proud Green-Gold enviro school and we decided we needed to share our message to the wider community in the form of a performance!

The whole school worked together to create an amazing event of dance, music, drama and art to share our message. We began by enlisting the help of Julie, a parent with knowledge of performance. She gave us some fabulous, creative new ways of doing things including the performance being in the centre and the audience surrounding us and on the stage!

Another new thing was deciding to have the albatross as a huge puppet. We were sooo lucky to get the help of Sarah Blake, who is not only a talented puppet maker but also Sir Peter Blake’s daughter, who worked with a group of children to make the two metre long puppet! We love that we were able to make a connection with the family and were thrilled she could attend a performance here at the school in our Sir Peter Blake hall!

We asked a talented past pupil, Elijah Whyte to write some original music for the performance and he said Yes! A group of children wrote the first draft of lyrics and he turned them into a song!  You can hear it in the background now! At the end of the performance the entire school sang this song with the albatross flying around in the centre of the hall. The teachers said it gave them goosebumps!

The whole school was involved in developing the ideas for the storyline, in designing and making props and costumes, creating instruments, choreographing, designing tickets, being ushers and generally making important decisions about what message we wanted to share and how we wanted to share it. We made our own costumes and props, using all sorts of items that had been discarded.

We worked in large groups and chose which scenes we wanted to portray and whether to dance, act or sing. We threw ideas at the teachers and the teachers made sense of it and then gave the ideas back to us to finalise. Each group worked on a scene and then we put it all together!

In the story we see Toroa Tawhiri-matea look down at butterflies peacefully flying. He is happy as he flies off on this travels.

He returns to find factories, and the air thick with smog.

As he flies around he sees people producing rubbish and he sees what was once a fresh, clear river is now full of dying creatures.

A vortex of rubbish is spinning out of control and Toroa Tawhiri-matea is caught.

The people of the island see what has happened and are ashamed. They protest! They are seen on the news! The people come together to clean-up the waste.

The waters are once again clear and sparkling and the Pohutukawa is flowering. The people look to the future and change their ways.

"After time, with much hard work, the island and its people were living in harmony once again. The factories shut down and the island’s beauty and purity were restored. Trees towered above isolated coves. Crystal clear water trickled from streams. I was never in danger and there was always a food supply nearby. We lived in paradise, my beautiful friends and I.”